I have a “special” shelf on my bookcase at home.  Not just any book is allowed on it.  In fact, the criteria is pretty specific: it’s reserved solely for the books in the Wheel of Time series. 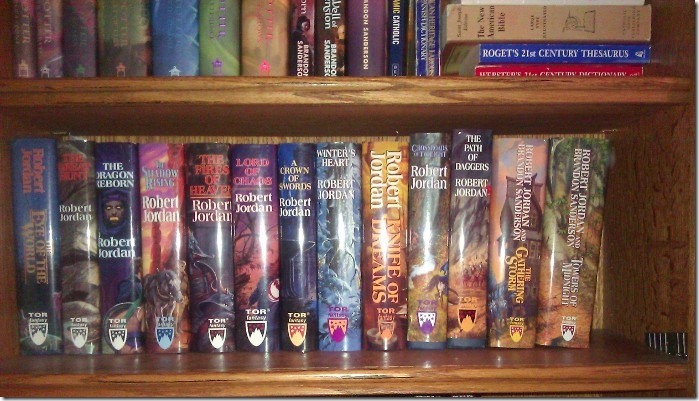 Well, the end has finally – finally – come.  Tomorrow, January 8th, 2013, the 14th book in Robert Jordan’s Wheel of Time series, “A Memory of Light,” will be released.

The shelf is finally going to be full.

It’s difficult to express exactly how much I’m looking forward to this book, and yet how sad I’m going to be when I read the final pages.  On the one hand, holy hellz, It’s. Finally. Teh. Endz!  Fans of the series like me have been following the story for more than two decades, feverishly devouring each new volume as the tale progressed, often times with the inching speed of a caterpillar, towards what we all hope will be a rewarding, climatic Final Battle.  That’s a long time to wait for something you knew was coming in the very first book.  So, yay for the reaching the finish line.

I’ve been reading this series for most of my adult life.  Actually, if adulthood starts at 18 years old, make that my entire adult life.  I’ve known and loved these characters – both their endearing traits and their irritating ones (and yes, just like real people, they have both) – longer than I’ve known my wife, my children, almost all of my coworkers, and many of my friends.  And when I finish reading “A Memory of Light”, those characters’ journey will be finished. For the first time then, I’ll have to walk the path of my own life knowing that I’ll never again hear the voices of Rand al’Thor, Perrin Aybara, and Matrim Cauthon speak new words.

As you can tell, I’ve been feeling a bit contemplative about the whole thing, so last night I decided to revisit the books that have been waiting to become a completed set for years. 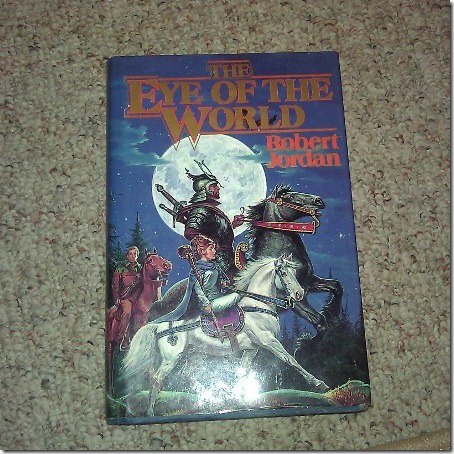 This is the first book.  I didn’t actually read this book first, though, because, as I said, the first time I read my friend’s borrowed copy.  I received this hardcover copy as a gift, years later, to complete the hardback set.  I did go back and read it, though, when I re-read the full series several years ago.

This one, the second book in the series, is the one I typically say is my favorite.  It’s the first book I ever stayed up all night to finish, even though I had to be a work at K-Mart at 9:30 in the morning the next day.  I worked in the hardware department then.  All I remember of that day in the store was being ridiculously slap-happy.  I’m pretty sure I mixed some paint for customers.  Odds are pretty good that they got something more “Molasses Daybreak” than the “Robin’s Egg” they wanted.  Whatever. I’ll still contend that was better customer service than you can get at K-Mart now.

This is also the first book in the series to give me a lump in my throat the size of Manhattan – and nearly cause a quite unmanly fit of full-blown crying.

No can prove anything.

This one came out when I was but a mere co-op, writing and executing software test cases.  I wouldn’t meet my wife for another 5 years.  Now I’m the most senior software developer in my department, have been married for 12 years, and have four kids.  Oh, my, how things have changed. 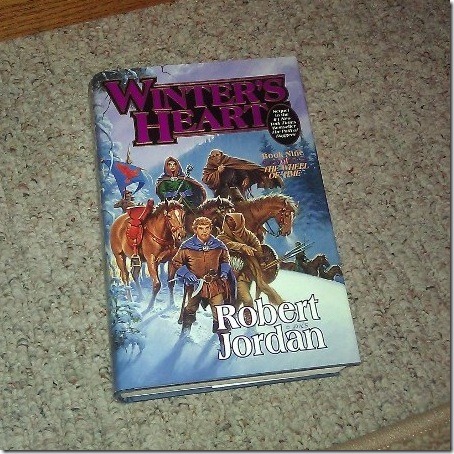 Being so attached to a series that you’re willing to hang onto for 14 books over the course of 20+ years is not all fun and games.  Some of the books seemed like they did more running-in-place than advancing the overarching plot.  When I read this one, though, I thought we were finally taking our first steps down the path to the Last Battle.  As it turns out, I was mostly wrong; we still had some inching yet to do even after it.  Regardless, this was also the one where the Something Remarkable and Major I forecasted would happen years in advance finally actually happened.

That made me feel pretty smart.  But did I get so much as a golf clap?! Noooooooo.

This one, book 12, was really the beginning of drive to the big, all-encompassing conflicty battle of Good vs. Evil at the end of the series.  It’s also the first one not written solely by Robert Jordan, who lost his own final battle with a rare cardiac disease following the publication of book 11.  Fantasy author Brandon Sanderson was hand-picked by Mr. Jordan’s widow, Harriet, to complete the series.  This book depicts one of the most powerful and satisfying battle scenes I’ve ever read, which had been building since book two.  It was, truly, one of those F$*K YEAH! kind of things.

This is book 13.  It finally tied up that one seemingly-over-but-we-all-knew-better sub-plot that’s been finished but not yet complete since…um….*thinks back*…book four.  Also, when I got to the last twenty pages of this book, I started to nurse that special kind of quiet, simmering frustration that eventually builds to near-incoherent rage because I knew the story, the-whole-ball-of-wax-plot, finally stood on the precipice…

…and I’d have to wait two more years to finally go over that cliff.

Well, those two years have come, and gone.  One way or another, I’ll be joining all the characters I’ve know for so long as we all go careening over the edge.  Truth be told, I half expect that I’ll be nursing a familiar Manhattan-sized…no, make that Texas-sized…lump in my throat for the duration of time it takes me to read it.

I’m excited like a kid on Christmas Eve, and yet my heart is heavy knowing the end of it all is finally here.

One way or another, tomorrow my shelf is going to be complete.

PS: Now that I’ve shared a few of the ways the Wheel of Time series touched my life, how about you? Do you have any memories made special because of the series across the past two decades?  What about another series? We’d love to hear!