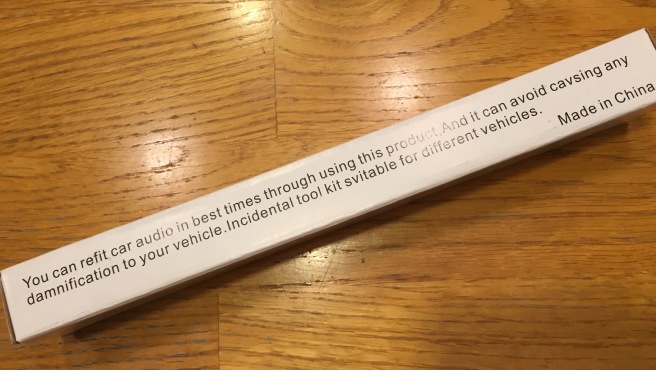 We recently ordered a USB hookup with a Bluetooth extension for my car. You know, so I can pretend my 8 year old Gunmetal Gray Honda Accord Middle Aged Man Sedan is super cool and hip and able to play the Apple Musics that all the kids are into these days. The Puddinette got it for me Christmas, actually.

The whole kit arrived today and to say I’m super excited about it would be like saying service on the Hindenburg could have gone smoother.  At the same time, though, I’m also mopey like a toddler with a lost woobie, because, see, it’s Monday now and I’m legitimately not going to have time to take my dash apart and install the big caboodle until next weekend, probably.

Anyway, speaking of taking The Middle-Aged Man Mobile’s dash apart, I decided to drop the whopping $4 bucks for the dash pry tools, in the interest of making sure I didn’t take a flathead screwdriver to my gear shifter panel and turn it into something resembling ground chuck. Because, sure, it’s a 4-door family sedan and not so much headlining the Cavalcade of Customs basically ever, but I still spend nearly an hour in it daily, and no one needs an bonus time for visual reminders that he hacked up his dash panel like a Tarantino bad guy.

All of that aside? The best thing about my brand spanking new set of plastic pry tools is the box they came in.  Pictured above, some marketing genius decided to the explain their key function on the side of the box:

You can refit car audio in best times through using this product, And it can avoid cavsing any damnification to your vehicle. Incidental tool kit svitable for different vehicles.  Made in China

Isn’t it magic? I mean, “the best times” for “car audio refit” are magnificently A Tale of Two Cities, and while I don’t have any clue what “cavsing”is — having cow babies? Doing leg exercises? Who knows? — I know it likely isn’t something good, especially in light of all that possible damnification!

Now, anyone want to install this for me before the weekend? You can even use my refit tools.

Before anyone tells me I’m a terrible, awful person, yes, I do realize that whoever wrote that copy has a much better grasp on written English than I’ll ever have on Cantonese, Mandarin, Hakka, Xiang, or any other Chinese dialect. I make poke a little fun, but if I’dtried that in Mandarian, it’d probably end up reading like Klingon…and starting an inter-galactic war.

3 thoughts on “Amazon Sends You The Darnedest Things”