I’ll totally forgive you if you figured I’d given up already, considering I went all weekend without a so much as a peep. I’m not going to lie, this business of 30 goals in 30 days is actually a bit harder than I’d originally thought, but keep your shorts on and we’ll get to that in a minute. Before that, though, let’s hit on what brings you to my little corner of the interwebs, which we all know is “pictures of me feet”.

Days 5, 6, and 7 represent Friday, Saturday, and Sunday, respectively. I have good news and bad news about each. The good news about Friday is that I easily accomplished what I set out to do! The bad news is that what I set out to do was maybe the easiest goal so far: take a day, wrap up week one’s posts, and otherwise don’t stress. That’s why Friday’s post was shorter, sweeter, be arguably less substantive than a Vegas drive-thru wedding.

Day 6, was a little better. As we’re ramping up to the first day of school Wednesday, the Puddinette and I are arranging a Day Out with the Parents for each of the kids. It’s a thing we’ve done every summer for several years now, and it’s always great. Admittedly not always easy to put together, mind you, and not just because we have a lot of hectic schedule action happening up in here. Fun fact: did you know that the older a kid gets (in general), the less likely they are to want to spend the day with just Mom and Dad? Oldest Son has a driver’s license and ready willingness to use it. We may have to schedule a college visit or two with him just to slip his Day Out with Mom and Dad in on the sly.

Thankfully, with Youngest Son (formerly known as The Attitude), no such trickery is required. He’s always looking for a excuse to do his favorite things, and as the fourth of four, definitely enjoys him some Mom and Dad time. So at his request, we had lunch at his favorite sandwich place on Earth and then caught a showing of Toy Story 4. That’s the good news. The bad news is that Toy Story 4 is squarely equivalent to Toy Story 2. It was a fine movie, all things considered. Actually, a good movie compared to a lot of the awful retreads they’re making these days. But the franchise didn’t need it. Toy Story 3 was a masterpiece, and I’d have preferred if it had forever served as the exclamation point to round out the series.

But, hey, I’m just a hack with a blog. What do I know? Your mileage may vary.

That brings us to Day 7, Sunday, where the positive is that I did achieve a goal I had set my mind to. The down side is that it wasn’t the goal I set out for. In fact, what I did achieve, I only managed through failing.

Thing us, my plan was to hit up all the usual Sunday stuff — chores and laundry and whatnot — while also getting a few things done for work in the afternoon (as opposed to my usual preference, naptime). That part was all pretty solid, but the headliner for the day was supposed to be completing Chapter One of my Fury draft. Figuring I needed somewhere between 1500 to 2000 words, it was a pretty lofty goal, if I’m being honest. But I’ve done 2k days before. It wasn’t out of the realm of possibility. Unfortunately, I ran out of day before I came up with enough words. I did succeed in dropping another 700+, which I’m pretty pleased with, especially considering I’m just wading back into the pool here.

But 700 wasn’t near enough to wrap up Chapter One.

I’m okay with that, though, because to co-op a quote I’m shamelessly pulling from a very popular movie from this summer, it’s all part of the goal-oriented gig. Sometimes you don’t walk away from a goal the winner. But what am I tripping about? Everything will work out exactly as it’s supposed to.

Point being that when I start this last week, I knew I was going to come up short on something sooner or later, so in the back of my head I’ve been thinking of failing one day as just another goal to be ticked off the list.

Mission accomplished. And more importantly, lesson learned. If I want to finish a chapter, make the time for it. Or, alternatively let the chapters come as they will. That’s how the first novel came, and it got done.

That was the weekend. How was yours? Oh, and what about that list I mentioned there? Is there a list? Well, there might be one, but we’ll talk more about that when we get to Day 8.

For now, here’s a picture of lunch on Day 7, and the birdling that literally flew down, landed on Youngest Son, and perched on him moments before I got this shot. 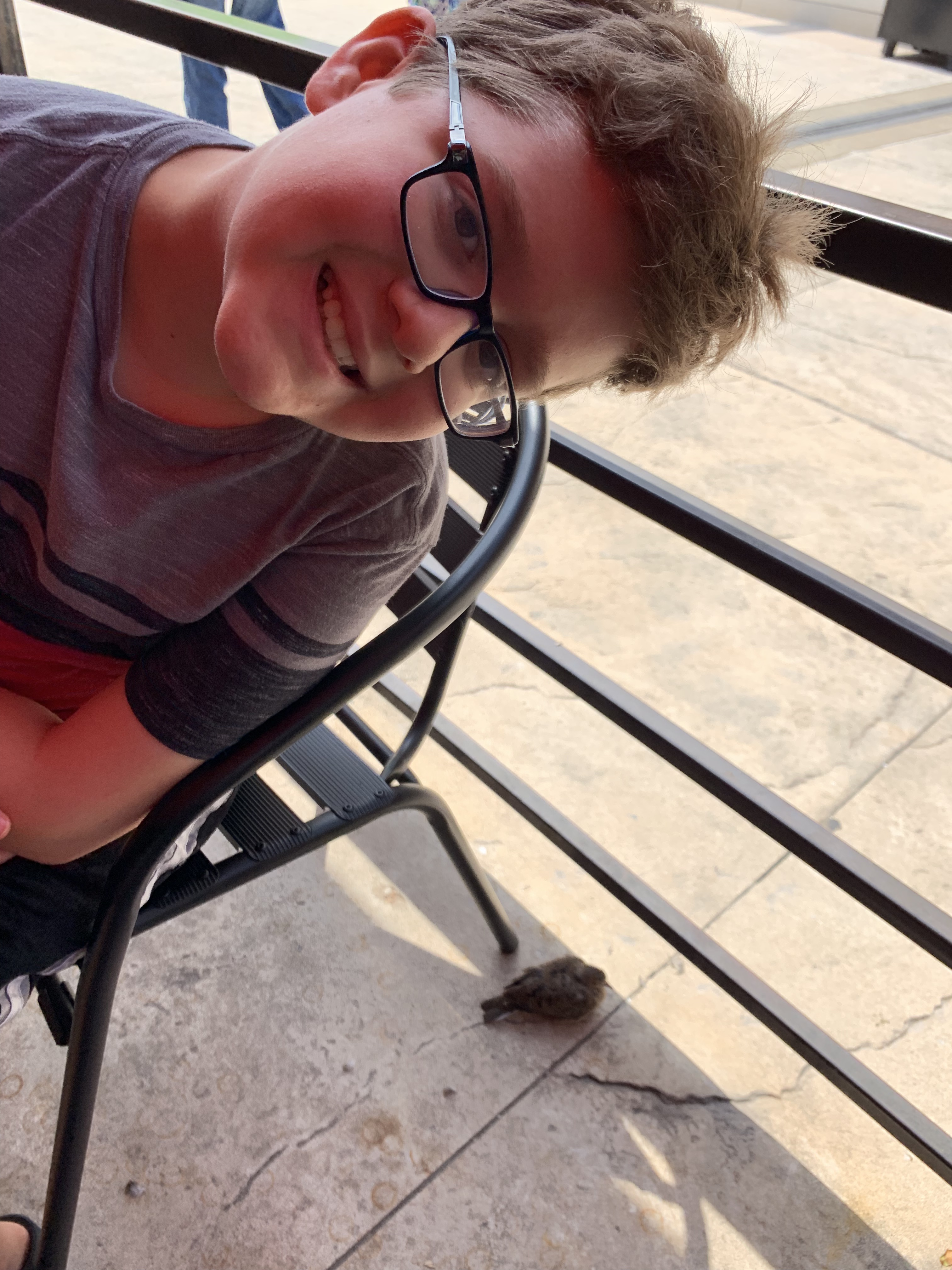 Have a great Monday, peeps, and an even better week!