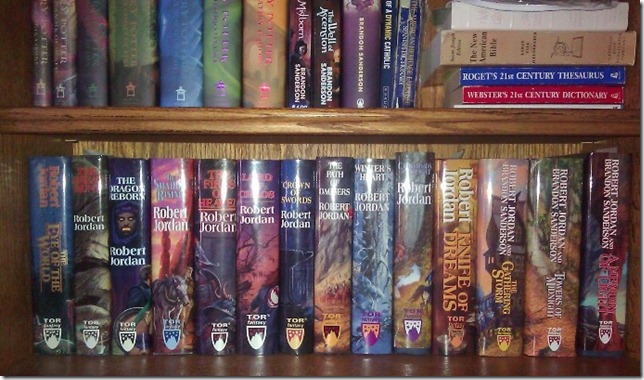 Many of you have asked about the space I had waiting for A Memory of Light since I made such a big to-do about having my Wheel of Time shelf on the bookcase complete.  There didn’t see to be a ton space there, did A Memory of Light fit? Or did it have to be wedge in there like a jeans model?  How does it look now, fully filled out?

Well, as  you can see from the image above, the book fits very nicely, thank you very much.  In fact, I’d say it looks right at home.  Clearly, I’m thinking either Tor Books or the bookshelf manufacturer must have had me in mind all along.

Now I just need to figure out what to do with myself.

It’s time to start working on a new series, I think.  Something else to get all tangled up in for years and years, if possible.  So I’d love some recommendations.  As you can also see from the above, I’ve read the Harry Potters and, just like the rest of you, I’m clinging for dear life to George R. R. Martin’s A Song of Fire and Ice (that’s the Game of Thrones book series for those of you who are only fluent in HBO).

So, by all means, let’s talk other series.  Who’s read or is reading one that a middle aged guy like me with little enough free time could get caught up in and stay up way past his bedtime reading?

Of course, lest you all think I’m a taker and not a producer, I’ll start the recommending myself.  I’m a big fan of Peter V. Brett’s epic fantasy series, the Demon Cycle .  The third book of which, The Daylight War, is due out just about any day now (Feb. 4th, I believe).  I’ll warn you that it’s touch of grit not always found in your average fantasy series, but the premise is original, and the characters are well-drawn.  They’re full of personality and have both the right touch of heroism as well as a complement of human flaws that make them real.  I’ve enjoyed the series so far, maybe you will too.

Now, then, it’s your turn.  Tell me what I should read next.

Speak now or, well, you can probably leave a comment later, too I guess.

19 thoughts on “A Shelf Complete and The Quest for Recommendations”