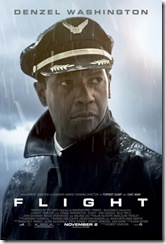 I had myself a conundrum last Saturday night.  One the one had, I had the Blu-ray for Flight at home, which looked all tempting and stuff.  I mean, for one, it’s Denzel.  Plus, everyone said, “This is a good movie”.  Seemed like a risk-free way to spend my Saturday.  On the other hand, though, I usually pool all my middle-aged guy lameness and watch Saturday Night Live at 11:30, hoping against hope that they’ll come up with something more creative and funny than that stupid Californians bit.

Failing that, all I can hope for is a segment Stefon during Weekend Update.  Ridiculous as it is, it always makes me laugh.

I was honestly mulling my options carefully, right up until the moment I learned that Justin Bieber would hosting and the musical guest on the show last week.  That’s just about the last thing I need disturbing my late Saturday evening “me” time.

So, then, Flight anyone?

Make no mistake, Flight is a very good movie. It’s got drama and conflict, and the characters are real and well-played. Personal confession: dramas usually have me clock-watching like a young professional before happy hour. Flight absolutely did not. Even with a running time of 2+ hours, it didn’t seem to drag. That said, though, in the end I was a tad disappointed. It feels like I’ve seen this movie before. Ultimately, it’s the same alcoholism/substance addiction film you’ve seen 100 times*, but this one’s wrapped around plane crash heroics. See it, definitely, but don’t expect something revolutionary.

Was Flight everything I’d hoped for, then?  No, not quite.  But I still have the awkward platonic dude-love for Denzel Washington.  And absolutely, watching it was time well-spent on Saturday night.

And I’d say that even if Saturday Night Live hadn’t been wasted on Bieberpalooza.

*Seriously, if you switch to Lifetime, there’s probably one on right now.