Soooooo, I know I’m way past due sharing some errant thoughts and/or possibly insightful comedic ramblings with you all, but I’m still plowing along on Project Hermey, and hoping to finish up the first draft soon so I can call the thing Done!

Not that it’ll  be anywhere near really, actually, ready-to-show-someone-I’m-not-married-to done at that point. No, see, because first I’ll have to put it in a drawer for a few weeks and try to forget what it was supposed to be about. After that short cooling off period, I’ll put on my bunny slippers and read what I actually put on paper, which, it turns out, isn’t so often what you intended and/or recollection.

At it turns out, it seems that an author’s brain is not just capable of making up stories, aka, lies for entertainment purposes, but also it’s often equally, if not more, skilled at lying to the author in question.

So after a minimum of 45 minutes of uncontrolled sobbing, wailing, and generally bemoaning my cursed, miserable lack of skill, I’ll consume several slugs of bourbon-colored encouragement, and then set to work on revising Project Hermey into something less suck. With a little luck, that’s when it might become something maybe, possibly, hopefully worthy of an existence beyond lining a hamster cage twenty-four hours after Taco Tuesday.

But I’m getting ahead of myself. I’m still at least ten thousand words from finishing the initial draft. Which, as you can see from this screen shot of the current State of The Project, means it’s going to be at least ten thousands words longer than the original goal. But, hey, whatever. A story’s got to be as long as that story needs to be, even if that means 10-15% longer than planned. That is, at least until I go back and Ginsu it up during the revision phase.

That said, the good news is that things are not all weeping and overwriting in my life at the moment. There’s also football and pumpkin beers. Yep, because yesterday at 10:29 PM (here in Cincinnati, at any rate) was the Autumnal Equinox.  That means that today is the first full day of autumn, and, as we all know, autumn is glorious time here on the surface of Old Earth, which makes me a happy camper, no matter how much work I have stacked up in the corner.

In celebration, then, that the place in the hemisphere where I live, at least, is tilting ever-so-slightly away from that scorching, blinding ball of nuclear fusion at the center of our solar system and ushering in a brief time of more moderate temperatures, candy-laden, spirit-based holidays, and a pumpkin-spiced version of anything you could possibly want to put into your body, I give you a previously posted Puddintopia picture. I made it with the mostly rudimentary graphics manipulation software I could find and skills that most Kindergarten kids would be ashamed to display on the fridge.

But I don’t even care that most people don’t recognize that it’s a supposed to be a football in the frame, not a loaf of bread. 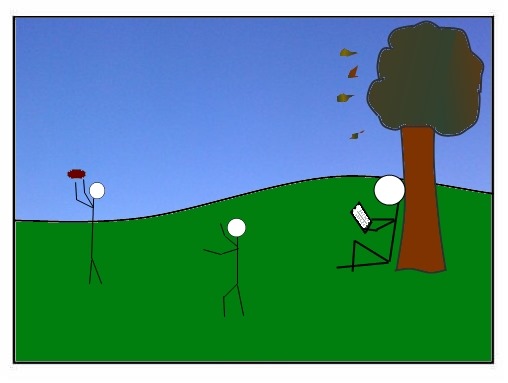 Because, fall, dammit. And that, my friends, is reason enough.