I seem to recall swearing up and down not even a month ago that I was going to reset my evening activity schedule and commit to writing and/or reading instead of spending three hours staring, slack-jawed, at a screen full of bright colors and explosions. In fact, there’s probably evidence of said promise in the recent archives of this website, as opposed to the time I shook my fist at a random doll-shaped cloud and swore I would hunt it to the ends of Creation and take my revenge  upon it for dolls being so damned creepy.

Good thing nobody ever found out about that.

Unfortunately, though, not unlike my plan to get back at Baby Pees-A-Lot, my best intention to do productive things after the kids go to bed seemed to have failed miserably last night. Once again, my feet were kicked up on the ottoman by 10:30, and I was staring, slack-jawed, at moving pictures of bright colors and explosions.

Yesterday, my birthday present came. Now, yes, my birthday is actually in March, but as the father of a large-ish family with minimal wants, it’s often difficult for me to decide on gift requests. I mean, I want a Tesla, and a yacht would be cool, but neither of those is really “gift-able” so much. At least not for my friends and family.

My parents, with what I assume is the typical annual exasperation, finally settled on an Amazon gift card, when I told them I’d kind of like to update my home theater. Actually, update isn’t probably the most appropriate term. I mean, I did already have most of the necessary equipment, but the room wasn’t wired for surround speakers and my receiver/audio processor was roughly the size, shape, and weight of a World War II Tacoma-class Frigate.

There isn’t exactly adequate space for the USS Burlington in our relatively new Ikea TV-stand. The wacky Scandinavian designers are pretty space efficient. Also, like the USS Burlington, my old surround sound processor was basically ancient. Let’s face it, a piece of electronic equipment that’s 10 years old or older is effectively an artifact more worthy of being tracked down by Indian Jones and cataloged into a dusty museum than being plugged into an actual electrical outlet. I mean, the thing didn’t even have HDMI ports. Zero. Zilch. None. My problem wasn’t so much “Oh noes! It only has one HDMI, how can I ever connect my cable box and Xbox and Apple TV. Woe unto first-world-me”, but, seriously, like, how will I ever stream “The Avengers” in HD and 5.1 Dolby without a EE degree from MIT?

Long story short, I finally bought a new processor, which you probably already guessed since I pretty repeatedly referred to The USS Burlington-model as the “old” or “previous” one in the paragraphs above. So I ended up using the ole birthday gift cards to get this one, which is both reasonably priced and has a much more moderate physical footprint.

Of course, that was only half the battle. The room wasn’t ready. We had the basement finished several years ago, but for reasons behind my comprehension, I didn’t have it wired for rear sound. I can only assume it’s because aliens were in possession of my body at the time, and it’s readily accepted that non-terrestrial beings have telepathic abilities, limited their need for home theater sound. Sure, ET may have had to phone home, but he didn’t need surround speakers.

Which means that between ordering my new toy and it arriving in time for Star Wars Day, I had some work to do.

Like, running speaker cable (In mostly obscured ways), putting in a speaker wire junction box (I cut out the drywall myself! Man card redeemed!),

and finally mounting the rear speakers I’ve had in storage for more than 4 years to a wall. 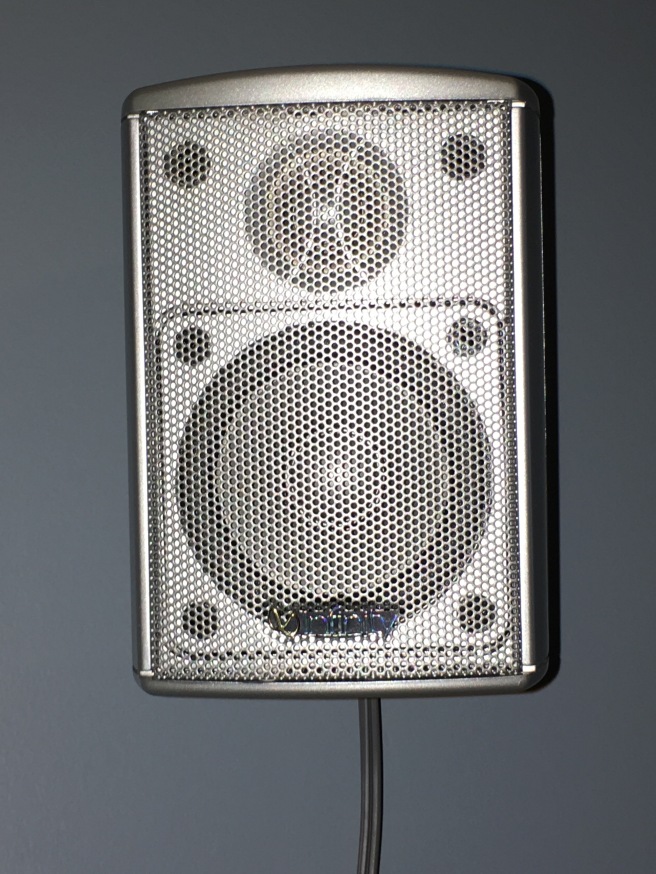 .
Nver mind that I was drilling holes in my basement walls at midnight Tuesday in preparation for everything, or that for the 6,327th time since our Wedding Day, the Puddinette questioned both my sanity and her own decision-making capacity when it came to spouse-selection. The point is that last night, I dropped the new receiver into its Ikea-forged home, hooked up enough wires and cables to morph into a Gordian Knot behind the TV stand as early as this morning, and reprogrammed my Harmony remote for the new hardware. 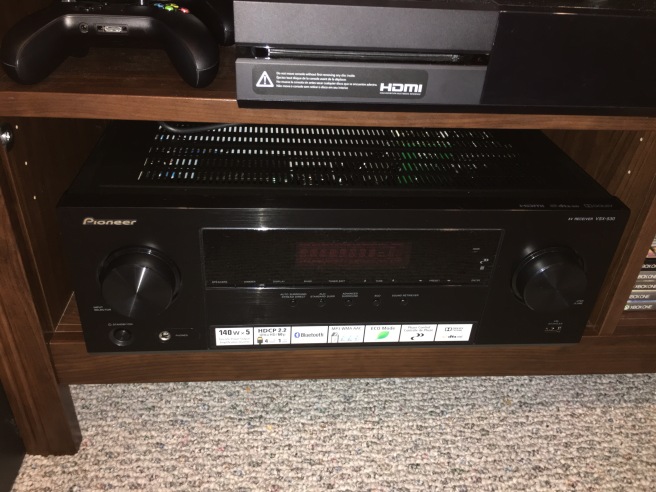 And thus by 10:30 PM, I had Star Wars: The Force Awakens cued up and ready to pan to a Star Destroyer right after that familiar opening scroll.

So, look, I know I didn’t tell a single soul “May the Fourth be with you yesterday,” and I didn’t write anything or read anything last night. Well, not counting stereo instructions, but those never count. But after the kids went to bed and my new toy was all set up, I settled in without a twinge of guilt and reveled in Star Wars in all it’s Dolby Digital 5.1 glory. I’d say I have no one to apologize to.

Well, except myself. I fell asleep about the same time the First Order <redacted for spoilers> because cold medicine. Also (and this is probably the bigger culprit), I get sleepy early on school nights because I get up at 6:15-ish and I’m not 23 anymore.

So I guess the only USS Burlington thing in my basement home theater room now…is me.