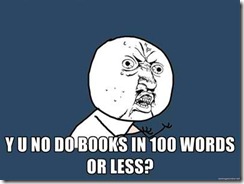 Surely you have wondered about it at some point or another, right?  I mean, as a self-professed “book person” and someone who always always has at least one book-in-progress on Goodreads, you have to wonder at what’s holding me back?

That is, why, as it’s obviously more fun than a laundry basket full of puppies to do it for movies, don’t I review books in any one of 100, 1000, or 10 thousand word increments?

Well, because.  Of the reasons.

Not quite enough of an explanation for you?  Fine. If you absolutely, positively can’t go on with your life unless I explain in, you know, some detail, I will.

The thing is, books and movies are not the same thing.  In fact, in my opinion, they don’t even exist in the same galactic neighborhoods.  Yes, sure, they are absolutely both a manner of storytelling, but that makes them roughly about as similar as a Ducati Diavel Strada and a Mack Pinnacle Sleeper cab just because they can both move from point A to point B.

Let’s be honest, I’m not good at these movie reviews.  Oh, sure, they might be amusing, but I feel pretty confidently that if you scroll back through the archives of the “100 words” posts, you won’t find much in way of bona-fide criticism.  At least, not much more than you might be offered by your average sixth-grader assessing iCarly.  When I watch a film, all I’m hoping for is somewhere between 90 to 120 minutes of entertainment.  I don’t have to feel like I’ve been challenged intellectually, I don’t have to identify with one of the characters so deeply I want to live their life, and I don’t need to spend the next week thinking about any of it.  Now, if any one of those things happens, great!  But when I slap a disc in the old Blu-ray player, I’m looking to not worry about my life for a specific period of time and that’s about it.  And my 100-word “reviews” are more often than not mostly just justification for why (or why not) I think that time was wasted.  So if you need rationale for why it’s not a complete waste of your evening to watch “Your Highness“, I’ve got your back I. But can’t/won’t give you a rock-solid breakdown of it’s subplots – I’m not really sure in this case such a thing is even possible.

As said above, I don’t invest much more than an hour and a half or two hours of my life in a movie.  And truth be told, unless it’s something I’m really excited about or something that’s exceptionally well-made, my attention during that two-hour window isn’t necessarily laser-sharp.  My mind may wander, I might get an email, I will almost certainly pause to visit the King’s water closet and refill my beer.  All of these things will affect how I engrossed I am in a movie, but in the end, they don’t generally hinder my ability to enjoy it.  When I read, though, I do nothing else.  I invest much more time than two hours and much more of myself than when sitting in front of the TV.  Not to mention the fact that that reading a story means that my mind creates every scene and character, not a director.  All of those things change how I respond to a book, how I feel about it when it’s finished.  And because I put more of myself into it, it’s almost impossible to evaluate it in a scant 100 words.

I don’t finish every book I read

Once upon on time, the thought that I might start a book and not finish it was as outlandish as the idea that I might one day headline a New York production of Swan Lake.  I mean, that’s outlandish even without considering the tights.  Back in my younger days, if I crept through the first few pages of a a book, then by power vested in me by the Commonwealth of Kentucky, I would keep forcing it upon my suffering eyeballs nightly until eventually, hopefully, I’d reach the end, the torture would end, and I could move on.  But no more.  I’ve gotten older, and at this point in my adventures, I realize that Life is too short to spend six to eight hours (or more) of my free time reading something that makes my brain cringe like you do when fingernails stroll across on a chalkboard. On top of that, it doesn’t help that having finally become a “Serious Writer,” I tend to read with a much more critical eye, and now see mistakes in published stories that used to be invisible.  Such problems often distract me to the point that I Just. Can’t. Go. On.

So, there.  Three solid reasons why I can’t – and won’t – likely every attempt a “book in 100 words or less” post.  This list isn’t comprehensive, mind you, it’s just the first few things that flew out of my head when I started contemplating the question of why.

What about you, though?  Can you reduce a book a few passing sentences, or like myself, do books burrow deep into you and make you step back and give Serious Thinks about them?