“Just put the bat on the ball. Watch it all the way to the bat.” 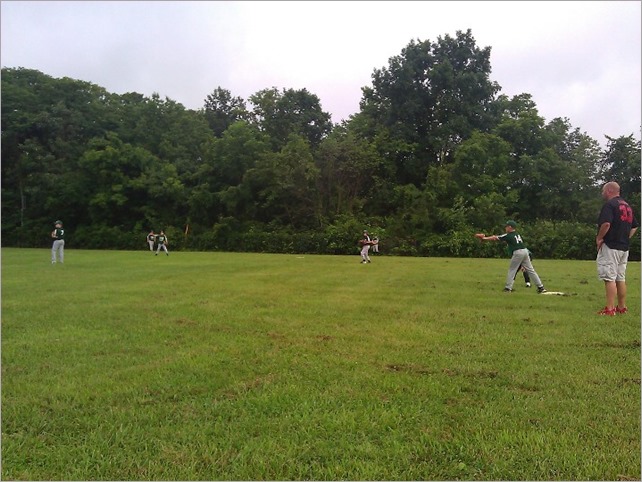 It was the last regular season game of the Puddinpop’s ten-week season. A season spent huddled with other parents in collapsible chairs around a dusty, sun-baked diamond, a soggy, rain-soaked diamond, a diamond filled with promise and disappointment.

“Yes, you’re fast and have a long stride. You should be beating out infield hits. Make the defense get you out.”

“You need to keep practicing. More time at the plate. Neither Babe Ruth nor Joey Votto were born a perfect hitter. Even as a pro, if you get a hit three times out ten you’re doing well. Keep trying. Just keep your eye on the ball.”

The evening was cool, even though the air was heavy.  A summer storm had come and gone, soaking the fields and turning them into muddy, puddle-covered pits of sand.  The season had to end that night. Tournament time was at hand.  There were no more empty boxes on the calendar for postponement.

Baseball, though, doesn’t have to have a backstop.  Dugouts are a luxury children have been living without for a century or more. The game requires two teams, four bases, a ball, a bat, and a special kind of love.

The coaches measured out 60-feet runs in the grass between two sodden fields.  They hammered the pitching rubber through soft clay.  Sure, the outfield was a little shallow to the fence, but no one was going to hit it that far anyway.  These were 10 year-olds.

The umpire shouted something at the pitcher.  In my mind, it’s always the much-loved “Play Ball!”, but that probably wasn’t what he said. No one really says that, especially in little league where the umpires are high school kids and “Play Ball” is something  grandparents want to hear.

Whatever he said, the pitcher took his meaning, wound up, and delivered. The game—however unorthodox—was underway.

The Puddinpop’s team started slow. The strike zone for a young pitcher can be a difficult place to find, and the attention span of 10 year-old infielders can occasionally wan.  After an inning, his team was down 3-0.  After two innings, it was 4-0. The game was headed downhill fast. Another few runs and the dreaded 10-run rule might come into play.

But they held in the third. A glimmer of hope was born.

In the bottom of that inning, the Puddinpop came to bat for the first time. I watched him approach the plate, apprehensive.  The fear of striking out after a season of failure manifested itself in his walk, his stance, the set of his face.

I believe the coach is the coach. I’ve never played baseball, even in my youth (but that’s a post for another day), so I’ve never been at risk of becoming that parent, the one that yells and screams and acts like a fool in front of a field full of children that need to see adults behave as role models.

But, even so, when your son stands at the plate alone, carrying his 10 year-old demons on his back, every parent’s heart breaks a little.

But this? This is Life. This is how it works. You try. And you fail. And you fail. And you fail again.  And you cry and sulk and wonder what has to happen to keep the failing from consuming you.  As an adult with four decades of being knocked around under your belt, you know it, to your very bones.  But still, you want to stand up there for him, and take his place at the plate, to spare him the pain that might result.

But you’re not raising him to be a child all his life. You’re raising him, you pray, to be an adult. And he needs to understand how to fail and try again.

So, instead, you do what you can, which is yell to him, impotently.

“Watch it all the way to the bat.”

“Let the bat do the work; you don’t have to crush it.”

And you cringe as he takes a swing at a ball over his head. A swing born of nerves more than anything else. But he has a good eye, and lets the next pair of pitches fly by after that—both balls, outside. Waiting for a pitch in that tiny, elusive strike zone.

And then he gets it. The pitch he’s been waiting for all season.  And for once, he doesn’t try to crush it like he’s in the Home Run Derby.  It’s a nice, smooth swing, almost perfect.

But just a half second too soon.

The ball flies higher and farther than any hit in the game so far.  Maybe any hit from his team all season.  He knows he killed it. He can’t stop running.  He’s between 1st and 2nd base before his coaches manage to make him understand it was a foul ball.

It doesn’t matter, though. He hit it. Scorched it. Made it fly. The demons are gone. Shaken off while he ran, lost somewhere along the base path.  Now.  Now he’s ready to be a hitter.

He steps back into the batter’s box, full of  newly found confidence. It’s his game now.

I frown, knowing what’s coming. My word-loving brain flashes back to a poem first read when I was maybe 10:

And now the pitcher holds the ball, and now he lets it go,
And now the air is shattered by the force of Casey’s blow.

He swings with all the force of Mighty Casey. And just as in ole Mudville, the ball sails past, smacking the catcher’s mitt with a thud.

His shuffles back to the blanket covering the wet grass where the bats and helmets go, face a storm cloud of hurt, shame, and disappointment.  Tears well up just below the surface, a cauldron of emotion barely covered by the diaphanous skin of being 10 and not wanting to show weakness in front of a crowd.

I want to comfort him, hold him, tell him it’ll be okay.  But he’s not my little guy anymore.  Hasn’t been for a long time. He’s a person now, not just a little kid. A person who wouldn’t dare be caught saying “I love you” except after he and all his siblings have been tucked in and there’s no one to overhear after the lights go out.

Even if he’d have it, the band-aid of my comfort isn’t what he needs. He needs to know how to fail and hurt and try again anyway.

With the crook of a finger, I call him to me.  He comes over, dutifully, not wanting to look me in the eye.

I should go easy on him. Be extra gentle.

But then, Life won’t be. So I play him straight, the way my father and my grandfather before him would have.

“Why did you strike out?”

Hands on his hips, he stares towards the outfield.

“Because I swung too hard on that last pitch. I was trying to crush it.”

Now he looks at me. “Because I knew how far I hit the foul ball. I wanted to hit the next one that far, too.”

“Did you try to crush the one that went foul?”

“Right. Just make contact. Let the bat do the work.”

The storm on his face is replaced with stony determination. I try to pretend we’re not both feeling the same thing, for different reasons.

HIs team holds again in the fourth.  And in the bottom of that inning, they come up with an inside-the-park home run (had there been an Official Scorer, it would’ve been called a double with throwing errors, but that’s how it goes in little league).

At 4-1 they have a glimmer of hope at the top of the fifth.  And, somehow, even with the bases loaded against them, they manage to give up only one additional run.

That’s were it stands when the Puddinpop comes to bat again in the bottom of the fifth.  Two outs.  Two baserunners.  Down 4-1.

He looks at me when he takes the plate. Gives me a nod of his head.

“Please, please, please. Come on. Get the bat up. Just make contact,” I whisper to myself. A normally reasonable person made manic by a child’s game.

My heart climbs up into my throat.

And then the season changes.

The pitch was close, and he swings to contact. The ball leaps from his bat, soars into the air, and flies over the left fielder’s head.  Both runners cross the plate.  The Puddinpop, who has wished for nothing more for two months than an extra-base hit, turns to second at the base coach’s order, the double his for the taking.

The outfielder playing the hit fires the ball to second, to try to catch him.  But the base is already his, and the throw is way off line.  It rolls through the infield.  The Puddinpop gets up from the dirt and scrambles down the base path to third.  The throw back to catch him is much closer this time.

But the third baseman can’t handle it.  It goes by, halfway to the outfield.

Home plate and a tie game is 60 feet away.

Or smile so widely as when his teammates met him at the plate in a chorus of cheers and delight.

What makes it is the trying and failing and trying again, and after a season of frustration and disappointment, learning to deal with the pain and anguish and shame. To stand up to it and still find some joy in the face of it even as it measures us against hardship. What makes it is the contract  we keep to continue playing, to never let the demons of failure win.

Because all of that can be washed away, as changeable and impermanent as chalk on a sidewalk, in a single moment of triumph.

What makes it is a father, along with a host of other nervous parents, pretending it’s just a game even though they’re no longer able to sit in collapsible chairs when that tie in the fifth becomes extra innings in the seventh.  As an error yields a run to the other team, requiring two more runs to win the game as the sun falls below the horizon over a makeshift field of grass and pain and hope.

What makes it is the July evening when everything goes just right enough and the kids come up with those two runs, having only three outs to work with.

What makes it is the one win that many of us—10 year olds and parents alike—will not soon forget, the wonder and reward of fighting back when there seemed little reason to hope.

What makes it is the lessons it teaches us about ourselves. About how, sometimes, personal triumph can buoy everyone around you.

What makes it is a car ride home that, for once, isn’t sullen.

2 thoughts on “The Great American Pastime”