I’m kind of tired today.  I was ridiculously tired yesterday, and on Monday I was probably pretty close to what normal people might consider exhaustion.  Which is to say, the most of the day was a blurry gray haze that I can’t much recall.

But at least now I know how Charlie Sheen sees the world most of the time.

For the record, it wasn’t really anything close to exhaustion.  If you ask me, that’s a clinic term that’ll get you a 24-hour stay in a white room, a bag full of clear fluids, and a drape that shows off your rear unmentionables to passers-by. No, really, I just needed a good nap. I wasn’t anywhere close to exhausted, any more than most people who claim to have a migraine actually one. But that’s another rant.

So what’s to blame for my persistent sleepyheadedness? Well, after days-weeks-hours of scouring WebMD for some hint of an explanation for my somewhat persistent drowsiness, I believe I finally have an answer:

I’m dying of the Bubonic Plague.

Oh, wait, no. That’s just what WebMD tells everyone.

No, what I really have is a very complex, technical condition known on the street as “Puddin doesn’t get enough sleep”.

Because, um, yeah, I don’t get enough sleep.  Sunday night I think I got 3.5 hours of sleep. Monday night it was maybe 5.  Maybe. Last night it was just about 4.

I know, it’s craziness, right? I should contact my local law enforcement officials because some fool is sneaking into my house at night at stealing all my precious Z’s right out of the bubble over my head. Or, barring that, I should put up some posters in the neighbor or something: 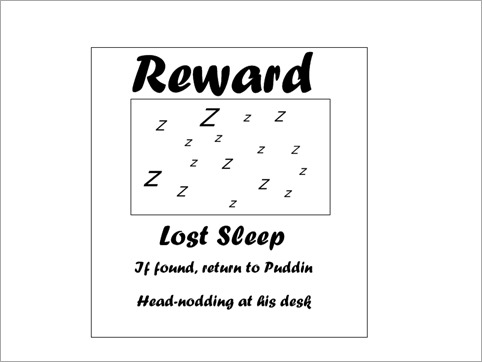 Okay, maybe not. See, the thing is, no one’s snatching my slumber away from me when I’m not looking. I’m giving it away. Seriously, if it was coins I’d be chucking it into the guitar cases of street musicians. I just…don’t want it.

Now, I know. That’s crazy talk. Fat, drunk, and sleepy* is no way to go through life. I realize that most people would give their firstborn to get an extra hour or two of shut-eye every night (which is ironic as it’s typically that same firstborn that really kills your long-term sleep cycle anyway).

Trust me, I hear quite regularly how terrible my decision-making is after I’ve stayed up much too late because Underworld was on…again. Often times, I’ll shamble up to bed, already bleary-eyed at 1:45 or 2:00 AM, and the Puddinette (recently woken by my room-entry) and be all, “What is wrong with you? How can you possible get up in four hours and function like a normal human being? You need to get more sleep.”

Of course, the key thing to keep in mind here is that—as we can all agree—I’m not a normal human being. I stopped being one of those sometime in the early 80’s. I blame elementary school and  John Cougar—as you do.

Kidding aside, she’s right, of course.  Especially considering that after a week of being the last one asleep every night and the first one awake every weekday morning, Saturday rolls around and my poor wife has to contemplate beating pots and pans over my head to wake me up**. In fact, I reckon there have been plenty of days she really wanted to take one of those pots or pans to my skull, but restrained herself only because head trauma is more than likely to cause extra lights-out time. In the real world you don’t get stars and birds circling your head for a few seconds when you get a skillet whacked to the noggin. Instead you get unconsciousness, a concussion, hospital x-rays, and a 270-lb former wrestling hopeful named Brock in white scrubs taking care of you.

And a co-payment. If you’re one of the lucky ones.

All that said, though, I still don’t want that “good night’s” sleep. Because, see, I’d rather have those few extra precious hours of life.

The only thing I know for certain is that Life—my life, your life, almost certainly the life of most of the new Fall shows—is finite.  You and me? We’re only gonna get so many hours of productive time on this particular merry-go-round ride. And I don’t know about you, but I’ve got plans for those hours.  More plans than hours to accomplish them, to be honest.  Basically, I want to do ALL TEH AWESOME THINGS, and I’m pretty sure nothing truly awesome ever happened when you were asleep.

Well, except for maybe that time you dreamed you were King of Australia and lived in a magnificent Aussie indoor/outdoor mansion served by a court of kangaroos and koalas and Elle Macpherson…that was pretty awesome, admittedly. But that was, like, the one time. And it was 1994.

So, yeah, I’m a little tired today, and have been all week. Probably will be again tomorrow, too. And you know what, that’s okay. You won’t hear me complain about it. Because, as Sam Eliot so eloquently put it in the classic American movie, Roadhouse, “I’ll get all the sleep I need when I’m dead.”

Between now and then, though, I’d like to kick some ass instead. And if that means stealing one or two of those quiet nighttime hours to do something I love and being a little groggy because of it tomorrow? Well, seems like a fair trade to me.

So next time your eyelids are drooping after lunch like a willow tree or you’re sporting bags under the eyes that are too big to be regulation carry-on luggage for commercial airline travel in the continental US, don’t think off it as a problem.

Just make sure you don’t waste the waking hours that got you there.

*Yes, yes, I know the actual quote is “Fat, drunk, and stupid”. I took a little license. So sue me. (But not really. Please?)
**Anyone claiming that “make up sleep” isn’t a real thing is stupid and a liar and a stupid liar. Or a communist.