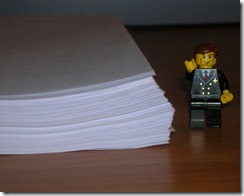 Man, have I been slacking.

Well, okay, so that’s not the kind of news you wake your significant other up for.  Truth is, the idea that I’ve been slacking about something is roughly akin to getting all hyper and jumping up-and-down while screaming because, *gasp* the tide is getting higher!

Get it, because the tide gets high everyday? Which is also the frequency with which I slack? See? Funny, right?

Fine, let’s try it this way: if I was a superhero, I’d be Slackerman.  Or maybe The Slack? That sounds a little cooler, right? At any rate, the point I’m getting at (poorly) is that me being me and following the natural order of things by continuing to slack off an a daily basis is rarely worth tweeting about in 140 characters, let alone writing a post.

And that’s something I don’t think I’ve ever done before.

I realized towards the end of last week that Project Hermey has been lingering on the old progress bar there to the right for entirely too long. Sure, it inches forward with a new % or two every few days, but then it’ll spend a few more right where it is.

Even more astounding, I started Project Hermey way, way, back on May 12.  For those of you with math skills (or maybe a fancy Texas Instruments calculator), that means I’ve been trudging away at it for more than three months.

Three. Long. Months.  Admittedly, three months is perfectly reasonable for an adult novel.  In fact, Project Macaroni took just over two months to draft the first time around.  But, then, the first draft of Project Macaroni was in the neighborhood of 112,000 words.  Hermey should come I under half that, and yet, as of this moment, in (roughly) the same amount of time, I’ve written a third as much.

The good news is, much of the Cro-Magnon feet dragging here has been deliberate.  Yes, I mean it. No, that’s not something I just made up to make myself feel better, like Archibald, my friend who the “doctors” insist is purely “imaginary”.  Yeah, well, they aren’t the ones who Archibald wakes up every night at 3:03 AM to talk about the little people under his skin and their incessant demands for Italian sausage and M&Ms, are they?

Uh, maybe forget I said that.

Anyway, the point here is that I’ve been taking my time on purpose.  Ever since my first novel, FAMINE, took 18 months to draft, I’ve been burning through new novels like a Smokey Mountain vacationer through apple butter. I’ve written several more MG novels in a little more than a month, and longer adult ones in just over two.  Not to toot my own whistle, I’ve been a hard charging, draft-making machine.

After all that high-speed writing, though, I figured why not try something new? Why give Project Hermey the full-court, NANOWRIMO-style press this summer? Why not take my time instead and enjoy a leisurely stroll through the plot.  Maybe think about it more up front and hopefully revise a little less on the backend?

“What a great plan!” I thought. In May. Back before the kids even got out of school for the year.

But now, here we are in late August, and I’m still at least 10k words away from finishing.  Probably more like 20 because, well, sometimes there’s more story than you think there’s going to be.  I novel is like baking a pie: it’s done when it’s done.  And as for that “hopefully revise a little less” business? Yeah, no. I’m very happy with the rough story in Project Hermey so far, but when complete, it’s going to be one of the roughest drafts I’ve ever finished.  Definitely in need of some TLC, a lot of trimming, reshaping, and molding.

All of that is fine; it doesn’t bother me one bit. Writing is, after all, rewriting.  Which is good, because this time around, there will be significant rewriting.

What I’m not so happy with is the three month-long process of drafting.  Every time I miss a few days, I feel like I have to start all over again to get the tone of it right.  And because some days have been less productive than others, the process feels like a century-old Model-T sputtering and puttering along, trailing a cloud of ugly, ashy, smoke.

Not exactly the feeling I’m going for with a light-hearted MG adventure.

So, no more.  Time to quit dawdling. No more slacking.  It’s time I  set myself a deadline, and since I’ve apparently only got two speeds: FULL THROTTLE and I’m-sorry-was-I-doing-something-here, it’s got to be a deadline that applies a little pressure.  Two weeks, then.  I’m going to type out, “The End” in this draft of Project Hermey by September 8th, even if it kills me.

And after that, I’m never taking this “slacker” approach to writing a draft again. Sure, the NANOWRIMO-esque 50k words in a month is aggressive and chaotic and could possibly lead to unnatural levels of caffeine consumption.  But then, anything worth doing is worth doing as quickly and sloppily as possible.

Because in the end, it’s all going into a messy first draft anyway, why waste weeks or months pretending that extra time means less revision?

Let’s face it, all it really means is extra slacking.

And if there’s one thing in my life I don’t need in excess around here, it’s extra slacking.

We’re all stocked up on that for years.

2 thoughts on “About Time For A Kick In The Pants”