It seems as if every time I turn around, there’s another new way to dot the I’s, cross the t’s, and close the book on summer.

It’s over at the Fall Equinox!

No, dummy, it’s over at Labor Day!

Screw you guys, it’s over when the distributors ship us pumpkin beers!

I don’t know what you’re talking about; summer is over when I finally give up, change out of my flip-flops and into shoes, put on pants, look around my house and realize that dust shouldn’t be measurable with a ruler and laundry probably shouldn’t be considered wall ornamentation.

For me, though, summer has always ended when the big yellow bus rolls down the street for the first time, with the August morning sunlight beaming off its roof. That morning was today. At the moment of this writing, all of my kids are back in school.

With the kids once again punching the clock on getting edumacated, I suppose I should get back to blogging on occasion, myself. Not that I did anything as intentional as taking a blogging hiatus while they were out of school, but the record speaks for itself. I mean, we’ve done a lot of stuff since back in June when I effectively wowed human civilization with evidence that I could, in fact, grow tomatoes and the world wouldn’t crumble into the smoldering heap of depravity and ash* while the Four Horseman galloped hither, tither, and yon (as foretold in Gardening Monthly’s Advice and Prophecy column). Since then, I’ve written of exactly none of it.

Before we move on, though, speaking of tomatoes, check out what the Puddinette and I hath wrought! I’m not even ashamed to admit that most of what you see there has already become salsa.

Oh, also, who wants some? I have the equivalent of a Great Lake of Spanish condiment in a bowl at home. And don’t worry, we’ve still got some ruby red ‘maters on the plant, just waiting to become famous. 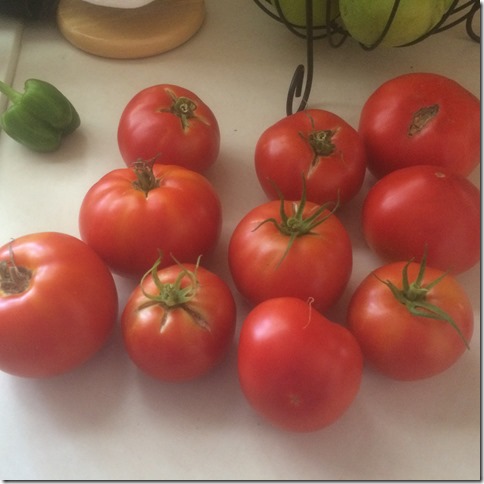 What else did I do this summer, since writing posts obviously wasn’t much of a priority? Well, I finished a draft of Project Bathrobe and sent it off into the world to be analyzed and improved by a number of Very Key People.  The feedback has been remarkable. It’s a very promising book, and you’re going to love it’s untold secret.

But, WAIT! There’s more. As a family, we doubled down on our efforts to do things that would be memorable for the kids, which we’re holding over our heads as the chief weapon in combating the (over)use of YouTube, Netflix, and personal electronics. We spent afternoons at the pool, took impromptu trips to King’s Island (the Midwest’s most kick-ass theme park, which is luckily in fair proximity to our house), and generally spent time trying not to just sit around the house.

Admittedly, though, we did some of that too. But as that kid in Footloose said, there’s a time for every season, and sometimes that even includes watching crappy summer TV as a family.

Oh! We also took a vacation. Can you guess where we went?

If you said St. Louis, give yourself a kewpie doll! While we were there, of course, I had to visit the Schlafly Bottleworks. You know, for a tee shirt. Although, I suppose it would have been criminal not to have a beer or two, as well. Don’t worry, I did my duty.

That wasn’t the only beverage I had in town that I fell in love with, either.  Fitz’s Root Beer and Sodas made a firm believer out of me. I’m trying to decide how much I’d be willing to pay in shipping for a mixed case of root beer and their delicious coffee cola. 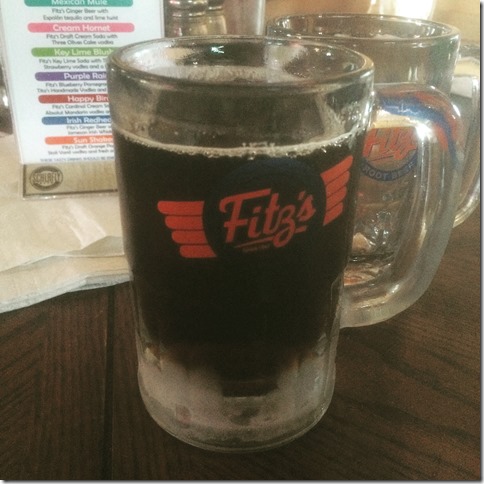 We also spent a day at Six Flags St. Louis, which was super cool (but I like King’s Island better)!

Now, though, all that revelry has come to an end. The kids put their brains back to work this morning (I hope), and I think it’s high time that I blow the dust of my blog and get back to doing, well, whatever it is I do here.

That said, word on the street is that the Harvest Ales are hitting the store shelves as we speak. And if that’s not a better way to cope with the return of critical soccer schedules and daily algebra homework, well I don’t want to know what is.

2 thoughts on “What I Did On My Summer Hiatus”