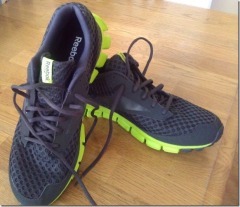 In case you’ve been wondering, yes, I more or less dropped the ball.  Remember the way back time, when the planet was still young, dinosaurs roamed the Earth, the calendar page said, “August”, and I had yet to begin the November sprint of chaotic word-spewing that was NaNoWriMo 2012?  Back in those sunny, happy, rose-colored days when I announced I’d be getting my lazy cushion-press off the couch and taking a few tentative first steps towards eventually running a half marathon?

The first of of said tentative steps was following the Couch to 5k program, getting myself into shape to run 5 kilometers at a stretch without falling over in a wheezing pile of grease sweats and huffing not seen since the Big Bad Wolf a quarter mile into it.  And you know what?  That program freaking works.  Because on November 2nd, I logged my first run of five kilometers.

Of course, ever since I first started the transition from “blubbering heap of carbon in a semi-constant state of lethargy in my recliner” to “actual human being making actual regular use of his, you know, actual bones and muscles and stuff”, I’d intended to write up one of the my patented* “10 Things I Learned From…” post.  Yes, as we all know by now, NaNo pretty much precluded me from any substantial bloggery in the month of November.

Honestly, I’m surprised I put up anything other than re-linked cat jpegs.

Nonetheless, November is past, and the time has (finally) come for 10 Things I learned from Couch-to-5k.

*I don’t actually have a patent on this.
**Mental note: write a Properties of the Universe guidebook

One thought on “10 Things I Learned from Couch-to-5k”