My father-in-law gave us quite the gift last week, as his tomato plants apparently went from “Ehhhh…maybe we’ll produce something for you eventually, if you ask really nice and wait until we’re damned good and ready” to “EFF YAY BABY! LET’S TURN UP THE ‘MATER PRODUCTION AROUND HERE TO 11!”

Suddenly inundated with an overabundance of delicious, ruby fruits, the green-thumbed father of my wife thus made these fine specimens appear at my home, to do with as we pleased. Of course, this is not my first rodeo when it comes to tomato harvest time. Goodness, no. In fact, I’m generally well-prepared come the end of August/beginning of September to accept whatever goodness his itinerant plants have finally chose to produce. To that end, I have a very simple, direct line of thinking when it comes to sudden possession of a bounty of garden ripe, perfect tomatoes just waiting in a basket on the counter to be put to good use:

MUST MAKE ALL THE SALSAS! 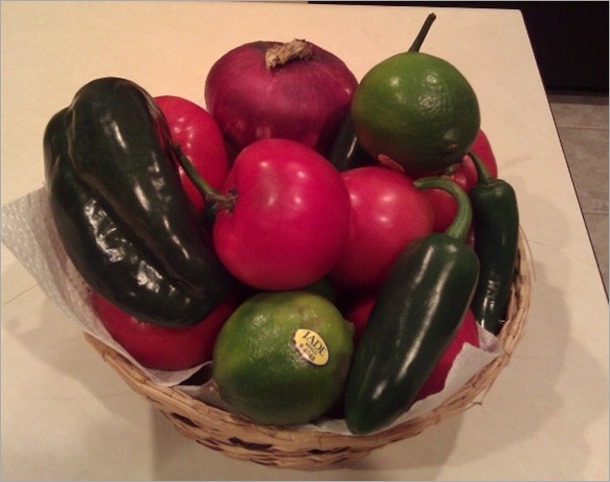 So this weekend I picked up the additional ingredients added above (not pictured: a quantum truckload of cilantro, because for real, cilantro is such a diva when it comes to having pictures taken).

Sunday afternoon, then, as my Bengals (with whom I’ve resigned myself to having a love/hate relationship from now until The End of All Things even though I know better) were busy giving away a double-digit lead en route to losing a very winnable football game against the Chicago Bears by being thoroughly undisciplined and seemingly unprepared, I turned that basket o’ goodness into a ginormous bowl of Puddin’s Salsa*.

Did it make seeing the Bengals give away a game any better? No, but then I’m used to watching the Bengals be largely unsuccessful, so at least I didn’t have to process any new emotions.

Plus also, I now have ALL THE SALSAS!

I’m not kidding. For scale, we included that abnormally large kitchen towel, which is roughly the size of Newark, New Jersey.

Ok, maybe it’s not that big, but seriously, do you need some fresh salsa? Did your tortilla chip fryer go all “I Love Lucy” on you Saturday and make a roomful of chips that are screaming like a wet baby for some bright, piquant salsa? Because now we’re, like, all drowning in it and stuff. I’m contemplating putting it on my bran flakes tomorrow just because a) it’s cheaper than milk, b) at least I know what in the 11th Floor of Hell my salsa is made from (as opposed to say, almond milk), and c) we have to use it for something before it sits in the refrigerator long enough to become self-aware and dominate humanity.

In other words, mmm…fresh salsa. Who wants some?

*What’s that you say? You demand a recipe as it is the reader’s right given any food-based post on the internets? Hmm…maybe. If a >1 number of you comment or other ask for it somehow, I’ll give you the lowdown. But I’ll warn you, I rarely make it the same way twice.

2 thoughts on “You say “to-may-to”, I say “delicious acidic fruit that’s taxed as a vegetable””