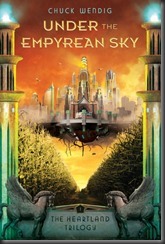 If you don’t mind me dragging you a bit—by the arms and legs or hair or whatever works—down memory lane, in a previous Look, I read a book post, I mentioned how I’d gotten to a point where I was struggling somewhat reading fantasy novels.  So it came as something of a surprise to myself when I looked over a list of new releases and knew I was going to read Chuck Wendig’s Under the Empyrean Sky (Amazon | Barnes & Noble | Indiebound).

Admittedly, part of that comes from being a reader of Chuck’s blog, Terribleminds. In addition to possessing a mind apparently warped to within inches of full blown depravity (which is evident in his exceptional blogging), he is a prolific dispenser of writing advice. Of course, in this day and age, that doesn’t exactly make him unique. There’s almost as much blathering about how to write on the interwebs as there are kitten pictures. But Chuck isn’t being fed grapes and cocaine while issuing edicts from on high that are to be compiled, bound together, memorized, and worshiped as holy scripture. No, rather, he’s down here in the mud-caked trenches with the rest of us authors trying to eek out a career, and his posts usually ring with a hint of “here’s what’s worked for me so far, maybe it’ll work for you? Who knows. Pass the bath salts.”

Because I’m a fan of his work, then, I want to buy his books. If I like what you do, I tend to think supporting them is a good idea, even if I’m on the fence about a particular work in question on the premise or a sample or whatever. Someday I hope to have fans of my own willing to support my work, even if not everything I choose to put out there is someone’s cup of Earl Grey, hot.

But none of that mattered when I read the hook for Under the Empyrean Sky. Chuck had me from the word corn.

Under the Empyrean Sky is a fantasy novel based on a world that once might have been like ours, but where the haves moved up to giant flotillas in the sky while the have-nots got stuck in The Heartland—a mid-western agricultural dystopia—along with an aggressive, genetically altered strain of super corn.  For reference, just because it bears mentioning, corn and and any other form of plant life taller than I am gives me the spine-quivers all the way down to my pinky toes. And seriously, don’t even get me started on sunflowers!

So. Anyway, the book is about a group of teenagers coming of age in this awful place where your spouse is assigned to you like a number in the DMV line and you have an entire soul-sucking lifetime of managing the mutant corn to look forward to. It’s almost enough to make a career in a cubical farm dealing with TPS report cover sheets seem not quite so dreary and pointless.

I’ll grant you, it’s an…unusual concept*, but, I’ll also tell you that Chuck knocks right it out of the park. I devoured the last third of the book like a Sasquatch with a bag of beef jerky. Herr Wendig does a masterful job of producing hints of little threads along the way that all weave together into one big, ugly knot of conflict in the third act. And even if the world can be a little hard to grasp given the ubiquitous mutant corn and the lack of personal choice or freedom, by the end it’s almost impossible not to be all-in with the the protagonist, Cael, and his friends and family. Also, this book gets a few bonus points from me for winning on the predictability scale. While there are some things I definitely did see coming, the big turn walloped me in the side of the head like a stinky 3-day-old mackerel.

My only complaint with Under the Empyrean Sky is that it takes a bit of time for any personal investment to really take hold. The first half of the book is necessary world and character-building that, while well-written, doesn’t give you a sense of the stakes that eventually come into play. It’s absolutely imperative to the story, though, because that’s what builds, heap upon inglorious heap, the vision of how tough and hopeless The Heartland can be for its residents.

And, boy, is your patience ever rewarded. After working your way through the beginning and getting a feel for the place and the characters, the story builds both in momentum and jeopardy, careening towards a climax that’s as compelling as anything I’ve read for a long time.

If you’re not afraid of a little belligerent corn, and can hang in there with a story for a good cause, I definitely recommend Chuck Wendig’s Under the Empyrean Sky.

It’s everything you didn’t realize you wanted from a corn-punk dystopia.

*Think about it, though, how easily could our own world become this one with just a few, not entirely out of the realm of possibility, changes?

2 thoughts on “Look, I read a book: Under the Empyrean Sky by Chuck Wendig”