Yesterday I was buzzing like a bee, all a-rarin’ to go, and chomping at the bit, even, consumed with magnificent intention to write The Annual Birthday post. I’m sure it would have been full of faux wisdom and charm, and reminders that one’s birthday makes them no more than 24 hours older than the day before. I mean, that’s mostly what I’ve written before, and after four years of blogging, I’m obliged to stick with certainly themes, obviously.

But then my word-spewing engine sputtered a couple of times, hacked out a thick, stinky cloud of black fog, and petered-out*. In a nutshell, I realized that I really kind of didn’t need to ramble off another 500-1000 words about my birthday. Because I’ve pretty much said it all before in a previous birthday posts (see links above) and also, anything new I might have wanted to include was pretty much covered in the 17 syllables I posted on Tuesday.

I guess that’s the beauty of poetry, right there. Finding a way to say what you want to say without travelling the circuitous, winding Road To A Point through the dark, dense Forest of Rambling Words (which may or may not often include a visit from the Amusing Tangent Fairy and/or Oompa Loompas).  Take this post, for instance. I’m still getting to the point three paragraphs in. In contrast, Tuesday’s haiku was a marvel of contextual efficiency.

All that said, I would be unforgivably remiss in mentioning the birthday yesterday without a quick discussion of breakfast.  Normally, meaning on days when I’m not celebrating another successful trip around the sun,  my breakfast includes a couple of slices of conservatively buttered toast (homemade, obviously, but my recent foray into bread making for fun and well, not quite profit, but maybe health-consciousness(?) is another post) and a wee bit of some cottage cheese.  But yesterday, well, let’s just say I pulled out all the stops.  Or stoppers? Stoppages? I can never remember.

The point is, this was breakfast yesterday: 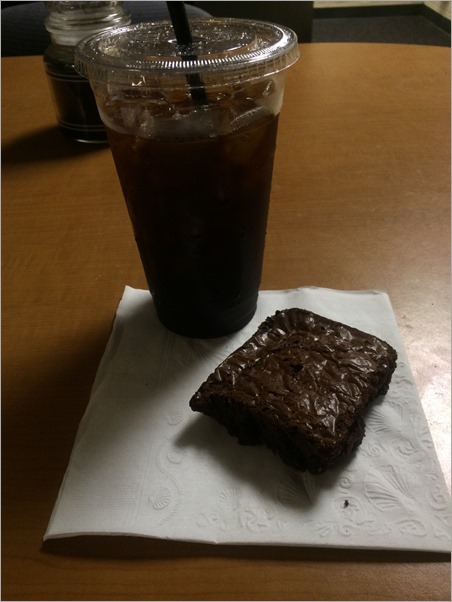 Yes, that’s an enormous iced coffee that I assure you was as dark and bitter as the soul of every aspiring author along side a delicious brownie. Brownies, as it turns out, make fantastic breakfast food. Mmmm…soft and chewing and chocolatey and full of hope and joy and wonder.

Anyway, so while I wouldn’t maybe suggest doing it every day, I cannot highly enough recommend treating yourself to the occasional breakfast brownie, and not waiting until your birthday to do so.

Oh, and if you’re wondering what’s up with the brownie fixation around here lately, well, it’s not really just lately.  I like brownies.  A lot.  And I’m sticking to my guns on the assertion that they should totally be the new cupcake. Because obvious dessert-related observations are obvious.

At any rate, thank you so much to everyone—the blogger types, the twitterers, and the army of facebook  friends and family—for wishing me a happy birthday yesterday. The day started off great (see: breakfast) and just got better from there, but it would have been but a pale shade of awesome without all of you.

One thought on “Foregoing The Usual Birthday Post (Brownie Now!)”