Okay, so it’s “My First Book” only in the sense that it’s a book of my words and pictures I bound together with staples at 3:00 AM one night twenty-plus years ago.  Nope, I’m afraid this isn’t news about having one of my novels published, but instead a trip down memory lane, where I revisit a project cobbled together hastily after my usual few weeks of expert professional procrastination for A.P. European History class my senior year in high school.

The Puddinette and I were cleaning up the basement a few weekends ago, and we stumbled across my little pop-up book(which doesn’t include any “pop-ups” to speak of, but plenty of those slide-action things I loved when I was a wee lad). We found it on one of those rickety shelves in the shadowy corners of our overcrowded storage area, the kind of place where forgotten things collect dust and patiently wait for the End of The World or maybe an estate sale.

My eyes lit up like a Roman candle when my wife put it my hands, and I’m pretty sure I even yelped in excited glee.  Not only because I’ve always held a fondness in my heart for this one of my high school projects, in particular, but also because I just knew it was destined for a blog post.  I simply have to share it with the rest of the world.  I’m compelled to do it; it’s a straight-up moral imperative. Because, if nothing else, among the clients of my literary agent (the wonderful, enthusiastic, delightfully forgiving Danielle Smith of Red Fox Literary) represents, many of them are picture book authors and illustrators that will be tearing up the world of children’s books in the years to come. I have a feeling many of them will be getting a kick of the, um, well, let’s say simplicity and leave it at that, of this book for months.

Of course, when I look over the book again, I can’t help but wonder if the thing wouldn’t make a much better impression if maybe I’d printed out the text instead of handwriting it. Let’s face it, the most complimentary thing you can say about my handwriting is that, at it’s best, it’s just a few demerits shy of atrocious.  But then I remember that I wrote/constructed the book back in the spring of 1991, when I didn’t have word processing software handy for tapping out these few hundred words on. My options would have been a typewriter or cutting letters out of a magazine like some kind of psychotic ransom note.

Then again, even that would have improved the overall aesthetic, I suspect.

At any rate, without further delay, I give you…The Road To Reformation: A Children’s Book For the Protestant Reformation in Europe.

(Author’s note: 2014, I seem surprisingly enthusiastic about taking the blame for the, um, “illustrations”) 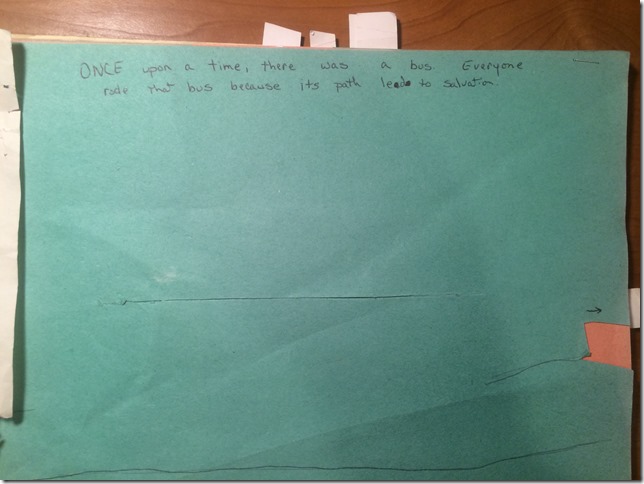 Once upon a time, there was a bus. Everyone rode that bus because its path led to Salvation.

(Author’s note: 2014, Interesting that I claim there was a bus, but um, no bus. Coincidence or unintentional commentary on the state of modern religion, hmmmm?*)

One man, Martin Luther, did not like paying to ride the bus to salvation, so he got off that bus.

Martin Luther then went and got his own bus. It slowly gained acceptance and gained order.

So then, there was another bus in that part of the world. This bus was toll-free.

Another man, John Calvin, also didn’t like the first bus. He didn’t like who was allowed to ride, and he was jealous of the driver and his hat. He got off the bus.

(Author’s note, 2014: John Calvin’s envy of the Pope’s hat isn’t well documented, but certainly it’s hinted at, historically**.  Also, I thought a certain level of artistic license was necessary. You know, to ratchet up the sense of tension and inter-personal conflict.)

Then, John got his own bus. He could control all the rules and actions on his bus.

The strange thing about John’s bus was that God himself hand-picked the “elect” (sic), or the riders of the bus. John and his “elect” drove on to Salvation. 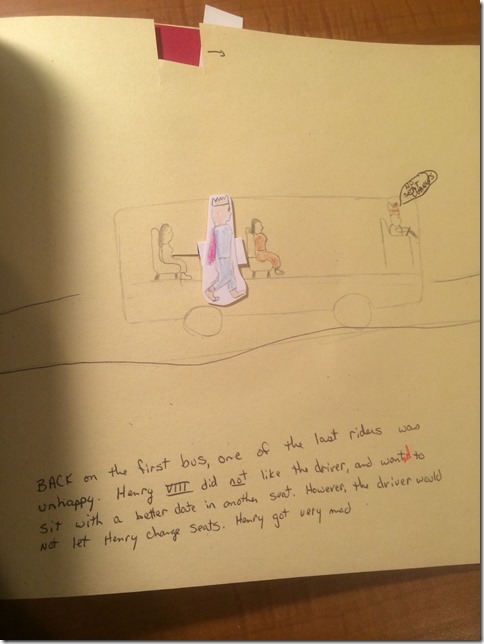 Back on the first bus, one of the last riders was unhappy. Henry VIII did not like the driver and want(ed) to sit with a better date in another seat. However, the driver would not let Henry change seats. Henry got very mad.

Henry kicked the driver off the bus and took control. All the people on the bus were glad of it. 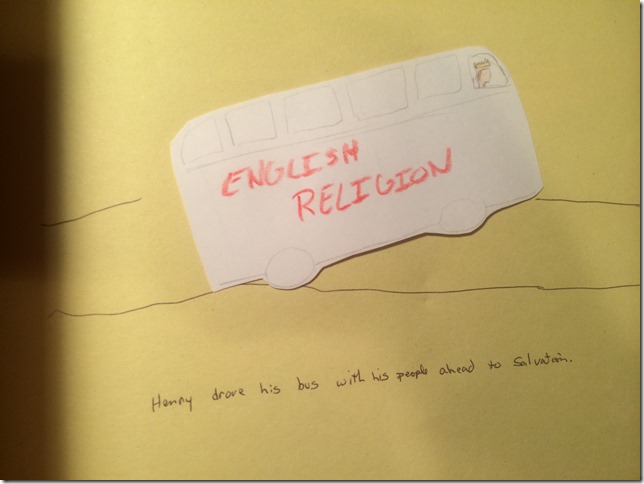 Henry drove his bus with his people ahead to Salvation. 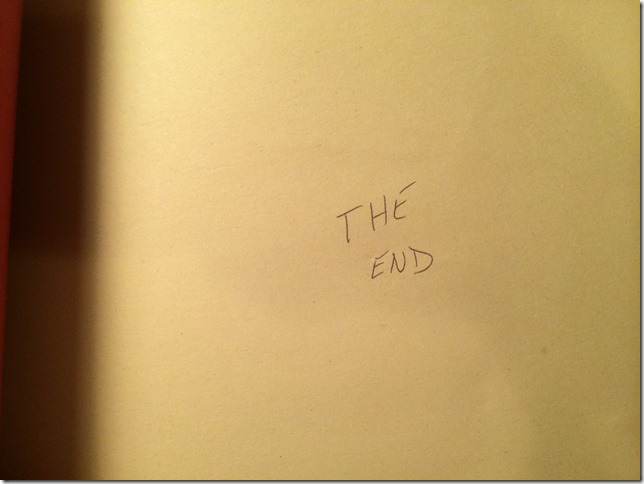 All the people were glad of it, indeed. Probably as glad as you are that you’ve reached the end of that silly book, and this silly post.

*Just kidding. Clearly a coincidence. After 20+ years, you can’t expect something as flimsy as a construction paper bus to have held fast, affixed with nothing but a tiny dab of Elmer’s School Glue!
**This is almost certainly a complete fabrication. But think about it…wouldn’t you be jealous of the Pope’s hat if you were John Calvin?

3 thoughts on “My First Book: The Road To Reformation”