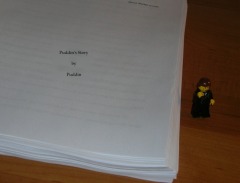 I know I’ve been kind of worthless when it comes to making any kind of sense or producing even a mildly entertaining narrative here this week.  Really, though, I swear, that’s over now and I’m going to be good and clean and room and eat all my vegetables and any and all the other kid-who-wants-a-puppy-style promises.

This probably goes without saying, but the thing keeping me pre-occupied all week was Brenda Drake’s Pitch Madness novel pitching contest hosted by her and several of her blogging friends.  The long and short of it is that it’s intended to get pitches in front of agents specifically interested in them.  The point of course being that if they’re specifically interested, the odds of making a match jump up like the striker toward the bell on one of those “Test Your Strength” carnival games.

Not that I know what it looks like when that striker jumps up because, well, I’m not exactly Popeye, but that’s a story for another day.

Anyway, I made it into the…duh, duh, duh…Final Round! of said contest, and I’ve been fretting all week that when the agents’ requests were finally revealed, Longshots and I would be standing there, looking at our shoes, alone, unpicked, and unloved.  Just like middle school wiffleball all over again.

Not today!  Longshots did, in fact, receive a request, and it’s one I’m pretty happy about.  I’m not going to go into all the details about it, because you don’t talk about Query Club or something.  You might jinx it or spook the agents or whatever. Anyway, the important point is that I didn’t end up without a partner at the Big Dance.

And that makes me pretty damned happy.

Since it’s officially a Puddintopia tradition, I’ve made a page just for Longshots-related stuff, for if and when something related might occur.  For now, it’s mostly just the query pitch, which I guess I’ll go ahead and include here.

Living on your lazy uncle’s salvage ship in space isn’t exactly every boy’s dream, especially when “living” mostly just means “working”. But for 12 year-old Chase Conrad and his nine year-old brother, Lock, that’s all they’ve got.  At least it is until Uncle Harel’s latest bad idea lands him in a jail cell with bail set at a number of credits so big it might as well be made up.

Now the boys have to do something before bureaucrats separate them and make them wards of the New Terran Confederation of Colonies.  Luckily, the New Terran Governor’s daughter, Bree, is missing. Sure, that’s not so lucky for her, but there’s a whopping reward out for whoever brings her home. So the boys “borrow” their uncle’s ship and head out into space to find her.

Finding her proves to be simpler than they’d imagined. But when the revolutionary leader responsible for the girl’s kidnapping captures the boys too, Bree instead has to rescue them.  And she’s not about to just go home. The rebels, with the help of traitors inside the government, are planning to strike at her father’s authority and trigger an interplanetary war.

Without knowing who to trust, the three of them, on their own, will need to uncover the rebel plot and somehow put a stop to it.  Otherwise, Uncle Harel sitting in jail will be the least of their problems.

And…there you go. What do you think? Pique your interest slightly or would you rather shave your tongue with a dull straight edge and frozen spinach? Either way, I’d love to hear what you think, so feel free to drop me a comment below.  Oh, and as is the case with my other books, if you’re an avid Puddintopia reader or just think Longshots sounds interesting and you have a third cousin who lives in a slush pile (no, that’s not like a shanty town), maybe suggest they swing by here?  I’d be much obliged.  Heck, that’d probably even get you a beer.

Thank you kindly for reading. Here endith the grovelling and shamless self-promotion.

2 thoughts on “Not being left without a partner at the big dance, and more on Longshots”