Today your typically affable, witty Puddin will be played a little bit more Walter Matthau than usual. I’m feeling more than just a tad cantankerous today.  Partly because a peek out the window is currently yielding lovely visions like this: 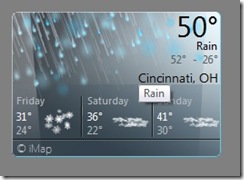 Okay, so it’s not exactly a peek out the window.  This is the internet age, datgumbit!  Nobody actually gets up and looks out to check the weather anymore.  That’s like, a sucker’s play.  That’s why we have widgets in the first place.  You know, because of Teh Laziness.

Anyway, so it’s again with the cold and rain today.  As you lovely reader-types undoubtedly know – and are surely quite tired of hearing about already – this cold rainy business just a smattering of days away from Christmas gives me a case of the Whine-ys worse than Santa Clause initiating an arbitrary ban on ponies in your kid’s annual Christmas Letters**.

Don’t worry, though, I’m not going to subject you to a reference to a certain band with a certain song that I always seem to bring up when the sky opens up and releases cold drops of moisture.  I’m moving ahead, see, with new material.

Ah…if only that “new material” wasn’t just an urban myth, similar to, say, the pod people or a nice, cheery interaction at the DMV.

But! But!  While I don’t have any of that, I do have an irritating case of the Ick.  And yes, in case you’re keeping score at home, that’s two cases of the Ick in as many months.  With all the crud in my chest at the moment, I sound like one of those raspy, sassy lifelong waitresses at the coffee shop that have been slinging hash along with cups o’ cold joe since before you were even a twinkle in your Daddy’s eye.

It was pretty much inevitable that I’d get the crud again, I’m afraid.  The kids have been trying to fend it off all week.  Tuesday night they all did a round of shots at the bar before bed.  These kinds of shots: 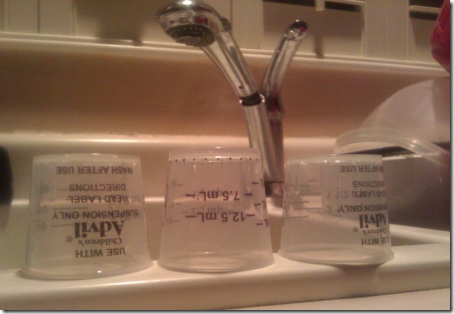 I shouldn’t complain, though.  Pretty much everyone else I know has been coping with a type of sinister digestive bug that leads to unpleasant things happening at both ends of a body – occasionally at the same time.  Multiply that by six people in my household, and you’ve got yourself a recipe for calamity.  With that in mind, I’ll take my Icky Crud and be happy about it, thangyaverymuch.

That’s said, let’s not forget that in addition to the bone-chilling-yet-not-white-and-pleasantly-holiday-like precipitation we’re getting today as a side dish to the deep-chest hacking that makes me sounds like I’ve got a family of garden slugs living in my lungs, tomorrow is that, um, Mayan End of Time thingee.

Only I would have an Apocalypse scheduled as the same day as the office Christmas party.  I guess if things go all pear-shaped, at least we’ll have liquor on hand, right?]

Which brings me to the question du jour: What are you plans to prepare for Mayan Main Event?  Are you going to spend this evening stocking up on water and toilet paper in preparation for The Worst, or is that just what you happen to call “Thursday Night?”  Me, I think I’m going to get myself a nice hoppy beer (something to cut the cruddy congestion) and watch Abraham Lincoln: Vampire Hunter.  Hopefully it’s so stupidly ridiculous that it’s entertaining, otherwise I expect there’ll be more groans coming out of my basement than from that octogenarian yoga in the strip mall.

Anyway, that’s my plan for getting over my grouchies and preparing to face yet another End of the World.  What’s your plan?

*Why, yes, that would make a sweet band name, wouldn’t it?  Or, better yet, maybe a middle grade adventure novel?

**Or, if you don’t have a pony-aged child, substitute the following: “worse than telling your nine year-old No More Minecraft until he/she eats some vegetables and cleans up that hurricane-trashed pigsty of a room”***

*** If you don’t have any children, substitute “worse than showing up to work on Monday morning and finding out the office Keurig machine is broken, and there’s No. Coffee. Anywhere.”****

**** If you don’t drink coffee, well, Good Lawd! What kind of shiny, happy, person are you, anyway?

One thought on “Cruddy, Cranky Crud-bombs at the End of the World*”