If you have any plans to one day produce progeny of you very own and possibly even raise them, there are a lot of things no one is going to tell you.  Sure, just about everyone – especially your parents and the parents of your significant other – will be delighted for you and will go on and on about how great it’s going to be and how everything’s going to be all shiny happy funtimes.  That’s irritating enough when you’re to attempting to assemble a infant’s exer-saucer that has more components than your new family minivan, and came with wordless, illustration-based instructions that mostly look like aliens doing some sort of extra-terrestrial Kama Sutra.

(I daily thank the Powers on High that I’m past that point in life.)

Ahem, yes.  the point here is that no matter how thrilled everyone is going to be, as I’ve said in posts before, there’s a whole metric boatload of stuff about parenting no one is ever going to warn you about.

Like, for instance, you’re going to swallow just about every word you ever say.

Case in point, something like a decade ago, I swore to just about anyone or anything that would listen – your Heavenly Host, your Elder Gods, your Fae creatures, your household pets, whomever – that I would never again willingly give my hard earned cash to Mike Brown, owner of the Cincinnati Bengals.  That I would happily root for the team and players, but I would flat-out would not fork over good money for tickets.  My days of paying to see the Bengals play, in person, at the stadium, were over.  At least until the team saw fit to hire a proper, bona-fide General Manager.  Preferably, one not having ties to the family.

And yet, with all my promises and posturing, I found myself in the position yesterday of having purchased this: 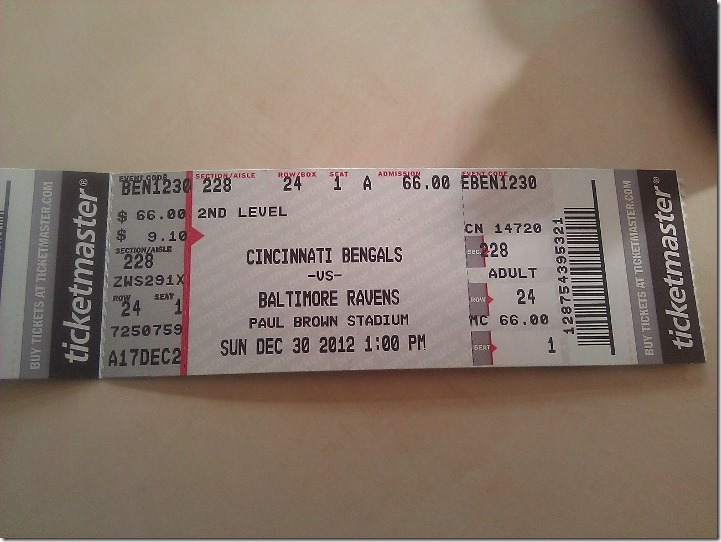 So, why would I give up on my long-maintained boycott of paying to see game as Paul Brown Stadium?  What could possibly termake me swallow my pride and break my oath?

See, it all has to do with birthdays, and birthday parties.  I come from a family of four kids, and the Puddinette, herself, is from a family with five kids.  That means that between us, we smack those piddling Bradys right out of their ugly-ass, paisley, butterfly collars.  With such big families, though, it means that whenever one of our kids has a birthday, we’re hosting the equivalent Patton’s 3rd Army.  Unfortunately, that means inviting a class full of friends over for the event is not really feasible.

The promise then, was that same as it was for me when I was a kid: on my 10th birthday, I was allowed to have a “friend party”, at the location of my choice.  This, was, of course, long before I realized Chuck E. Cheese’s was actually a portal straight to Hell.

As you may recall, the Puddinpop turned 10 in November.  There were muffins, remember?  Well, the Puddinpop is not your average kid.  He views Chuck E. Cheese’s with much the same derision I do, and instead would rather see an NFL football game in person than just about anything.  So when he asked if we could do exactly that – go see a Bengals game – rather than waste  some perfectly good Sunday afternoon football-watching time trapped in a windowless building with overpriced pizza and oversized rodents, I wasn’t sure how I could possibly deny him.

Obviously, I didn’t.  When faced with the choice of breaking a promise to him about his birthday, or breaking an oath to myself about the Bengals, there really wasn’t any question at all what would win.

The Bengals won yesterday, as the Puddinpop and I watched, while freezing our respective backsides off.

And if anyone is interested, yes the crow was delicious.  But don’t take my word for it, you’ll find out about it on your own sooner or later.  As a parent, it is your…destiny.

One thought on “Being a parent means feasting on crow”