It’s early afternoon on January 1, 2013.  After another raucous celebration to usher in the next 365 days, people everywhere are a slowly, determinedly getting themselves into motion, while trying very hard to ignore that splitting headache and the fact that vampires have, in fact, been correct about that annoying daylight all this time.

Luckily, I managed to avoid the dreaded New Year’s Hangover myself.  I didn’t it the sauce too hard with the kids last night, but maintained myself in a mature, dignified manner.  Well, or as mature and dignified as one can be wearing his pjs and a bluish, sparkly hat.

Since we’re all slowly getting started along the path of a whole new calendar, in keeping with tradition, I figured today for a good time to take a quick look back and a somewhat more detailed look ahead.  To sort of get our bearings before we stomp off into the uncharted wilds of 2013 like a drunken mountain dwarf with a bad eye.

I probably don’t need to say to much in the way for review, though, of course.  Since this is a blog and all, the point of which being to chronicle my daily adventures (or lack thereof), the archives can provide plenty of review of 2012 without much intervention from yours truly.  Last year, I learned a pretty important lesson S.C.U.B.A diving for the first time, starting sending out queries for my first novel, Famine, did a piss-poor job of getting started on the next Big Project: a non-fiction book, reconsidered (and revised and revised and revised) my query letter, turned 40-1 years old, learned quite a few things from little league baseball, started the ridiculous Weekend Debate feature around here (which I’ve grown to love), also started the equally ridiculous practice of writing movie reviews in 100 words or less, took a vacation to the beach, had a bad day, decided it was time to start running, learned quite a lot about querying over the course of a few months, decided I want an agent who really does love my work, and spent November writing a second novel as part of NaNoWriMo, and (finally), paid good money to see a Bengals’ game, because I’m a parent, which apparently is equivalent to “sucker”.

Whew, what a year!

Oh, and what was the most visited post of the year?  You’ll never guess.  Hands down, it was this one, a REPOST of the Green, Tasteless Beer poem I originally wrote and posted in 2011.  Since St. Patrick’s Day, it’s gotten more than 10% of this blog’s total number of hits in 2012.  Which just goes to show you, you never know what the Hell the internet is going to do.

So, what on tap for 2013?  Well, more writing and more querying.  In the next month or two I’m going finally start revising my NaNo novel in hopes of having it ready to query come spring.  Also, remember that non-fiction book?  Yeah, it’s still not done, and it’s blocking me up worse than a four-person dinner at The Melting Pot.  That’s got to be finished soon, because I’ve got ideas for two more adult novels that I’d like to write, this year if possible.

I’m also going to extend my experience running in the coming year.  On November 2, 2012, I ran 5 kilometers, on purpose, at all once, without stopping to die or suck oxygen like a lineman after running back a fumble.  Running has been difficult to get in consistently since NaNo, then the holidays, and now winter arrived in devious succession, but one way or the other, I intend to run a 10k in the spring.  And then it’ll be time to seriously start work on the that half marathon.

My feet are going to take quite a betting this year.

My liver, however, is going to get a bit of a reprieve.  Now, don’t get silly, I’m not planning to give up the sauce altogether. Where’s the fun in that?  I am, however, going to change how I consume it a little bit.  See, over the past few years, I’ve been drinking out of these quite a bit:

In case you don’t immediately recognized that, it’s a 22-oz beer glass. I use them frequently because, well, I often find myself cracking open a bottle like this:

No, I don’t mean a Bastard, necessarily, but a 22-oz bomber full of beer.  The thing is, though, I really don’t need to be drinking 22 oz of beer at a time.  Kind of the same way no one really needs to eat at the Chinese Buffet, and doing so will inevitably lead to shame and self-loathing.  Luckily, though, through a happy accident, I just happened to receive a box of brand new glasses for Christmas.  To be more specific, 17-oz pilsners.  If you ask me, a 16- or 17-oz glass is just about perfect for filling with 12-oz of beer and leaving just the proper space for an inch or two of frothy head.  See?  So for 2013, I’m going to be drinking from the somewhat more reserved smaller glasses. 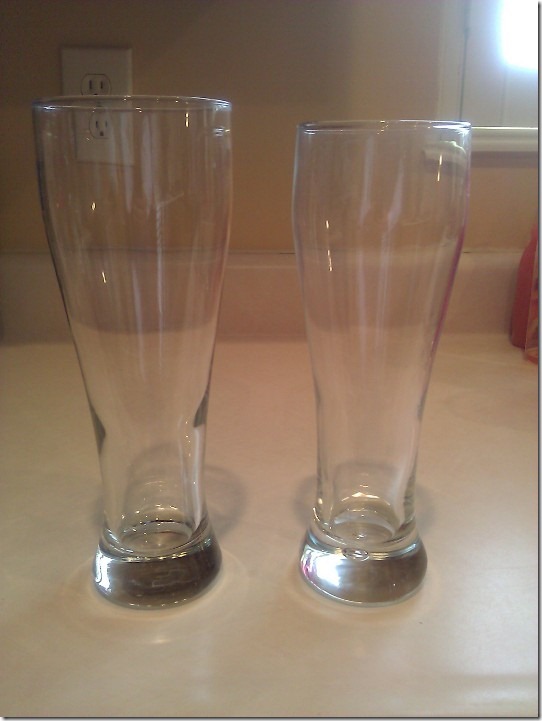 And that means no more 22-oz bombers for me, at least not on a regular basis.  Bottles of that size should be shared, so unless I plan on sharing, I’m going to leave them right where they are on the shelf.

That’s my look ahead.  What are you looking forward to in 2013?  You know I’d love to hear it.  Oh, and if you happen to be a writer trying to find your way into an agent’s good graces, drop me a line and say, ‘Hello!’  We’re all in this together, I’d like to get to know as many of you as I can.

Happy New Year, my fine readerly folk! Now, get out there, kick some ass and take some names.

As I said on twitter last night, I plan to kill it for the next 365 days.  So let’s all crush it, together!