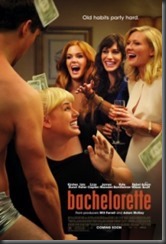 In the past, this “movie in 100 words or less” thing I try to do has proven pretty difficult.  I don’t always have opinions about a given thing, but when I do, my thoughts are rarely either neat or concise.  In other words, if you asked me if I thought Daylight Savings Time was the bane of humankind’s existence on Earth or a productive manipulation of the daily clock based on our rotational orbit, I’d respond with a hearty, “Meh,” and then go back to trying to get caught up on DVR’d episodes of Vikings while using this years crop of Easter Peeps to diorama crime scenes from CSI: Miami.

Shut up, it’s not as bad as painting feet and faces on eggs and then using them in stop motion plays with Lego sets.  You know who you are.

Given my propensity to ramble, though, if you instead ask me how I feel about sour cream, you might as well pull up a chair and pop some popcorn.  Yeah, I won’t be finished with that subject until I’ve popped a capillary or two and I’m foaming at the mouth (short answer: sour cream is ewwww!—but that’s a different post)

So I have to admit it was somewhat refreshing Saturday night when the Puddinette and I sat down to watch Bachelorette together.  Because ten minutes in, I knew this was going to be the shortest “movie in 100 words or less” reviews I’ve written yet*.

Don’t.  Just don’t.  I bailed on this thing 30 minutes in, and was ready to ditch it after 10. It’s not funny, they tried waaay too hard, the situations are beyond anyone’s ability to acceptably suspend-disbelief, and it’s uncomfortably—no, painfully—hard to watch.  The only thing good about this was the potential of the cast, and that was utterly wasted.  Hear me, people! Don’t. Just don’t.  Do your taxes instead, and maybe your neighbor’s too. It’ll bbYe time more pleasantly spent.

Of course, that brings up an interesting question.  Since I obviously didn’t see the entire movie (I really did stop it at the 31-minute mark), do I have any right to judge the whole thing?  Some could argue that I’ve missed the Bigger Picture.  That there might be some dramatic turning point later in the film would have made it worthwhile, or that perhaps some metamorphic change could’ve magically given everything I found terrible about it meaning enough to redeem it.

Towards anyone making such an argument, I heartily thumb my nose in your general direction and say, “Fartknuckledrops!”

Look, I get what you’re saying.  Really, I do.  But as a writer/director/film-maker/sponge-cartoonist, your job is to string me down a dark and terrible path long enough that I reach your epiphany moment, at which point everything becomes sunshine, belly-rubs, and gumdrops.  But if your movie is so off-putting that I’m instead looking to go shine my shoes for church the next day just to stop the pain, you Haven’t. Done. Your. Job.

Don’t throw a bird’s nest of cold spaghetti on my plate and tell me it’ll be a fabulous meal if I wait long enough for the Fairy Sauce Mother to arrive.  If she’s not around to give me a taste, at least, I’m chucking the pasta and going for tacos.

Or something.  You know what I mean.

*I really intended to stop after “Don’t. Just don’t,” but figured I owed you an explanation, at least.

2 thoughts on “A movie in 100 words or less: Bachelorette”